New Data on Incursions into Waters Surrounding the Senkaku Islands

The Japanese Coast Guard just released some new data on the “numbers of Chinese government and other vessels that entered Japan’s contiguous zone or intruded into [the] territorial sea surrounding the Senkaku Islands.” Here they are: 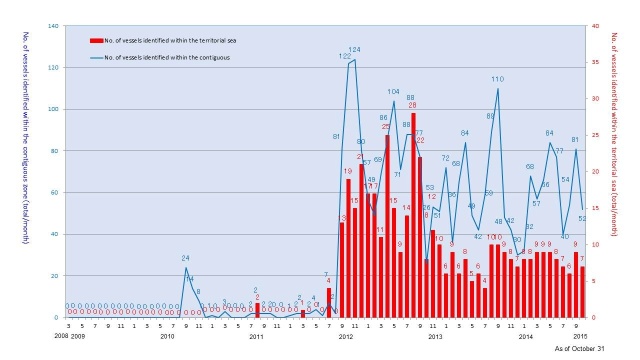 I see two noteworthy trends: first, an ongoing pattern of significant fluctuation in the monthly volume of incursions into the contiguous zone, and second, stabilization of entries into the territorial sea at an average of eight per month, which is down quite a bit from the highs of 2012. If you’re Japan, these patterns remain troubling, but the numbers concerning the territorial sea suggest that China may have settled on a strategy of stalemate, at least for the time being.